Where No Toddler Has Gone Before

Geddy recently discovered the book on the back of the toilet. I mean, doesn't everyone have that book? The one that keeps a man in the bathroom for hours, even if you told him before he went in there that dinner would be ready in two minutes? In our house that book is one about "Star Trek: The Next Generation." Within its pages lies a compelling read discussing the show's creation and a 7-season detailed episode guide.

Naturally, since Geddy is male and since he wants to do everything his daddy does—such as play guitar, build with LEGO, tickle Mommy, and watch "Star Trek" shows (he seems to favor the original series lately, because of Spock)—he wanted to start reading this book every time he used the potty. Every time. Flipping through the pages of this book is now part of his routine. It gives new meaning to the term "potty talk". Wipe, and flush, and recite "Star Trek" trivia. A normal trip to the bathroom now goes something like this:

Me: "OK." I get the book and hold it in front of him. Then I start pointing to characters in the pictures. Identifying Data and Captain Picard comes easily for Geddy.

We do this through each group photo we come across. Geddy now does well recognizing Geordi and Worf too. And if I don't quiz him on the characters, he gets upset. He's very disciplined about it. The only trouble is that he often won't pee and read at the same time.

One day Geddy trotted into the bathroom and got a shock: the Star Trek book wasn't there. I didn't want to go see where Luke had put it, so I said it was gone and Geddy should just go ahead and pee. Well, that took some time. The book had its place and it needed to return. A day or two later, Geddy, having had nothing to do while he sat on the toilet but wad up toilet paper and try to make a basket between his legs, needed another book. He tried one of his board books with the planes and helicopters, but that was just over too quickly. To his delight, he found the book he desired on the nightstand next to Daddy's side of the bed. He insisted it go back in the bathroom at once.

So there it is. If you are trying to get ahold of me, I'll probably be kneeling on the floor pleading with my son to just go already while he smiles and points to pictures, learning Dr. Crusher, Wesley, Guinan, and Counselor Troi. I just hope this isn't how he wants to study kindergarten. 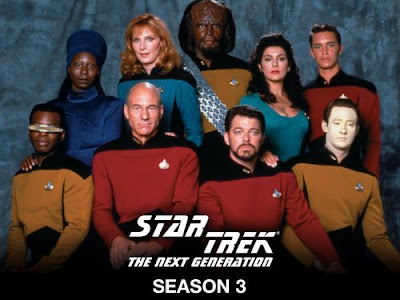 photo credit: Amazon
Posted by Words by Annie at 1:58 PM No comments:

After watching a comedian online go through a short routine about something that sounded rather funny and innocuous to me, I scrolled down to read some of the comments on the video clip. This is a habit I sometimes feed and then feel as if I should have just let it alone because the comments often litter my brain with word trash. My reason this time was that in the back of my mind, as I chuckled over the jokes, I thought perhaps some people actually wouldn't find the topic funny. Yep, my suspicions were confirmed. The comedian was bashed for being rude, for not accepting people who were different or had interests that she did not share. And many of them were VERY MEAN about it.

I know that comedians often get away with any type of joke because it's almost protected under the comedy banner (except racism usually gets them blasted by the media), and I don't usually like this aspect. We teach kids in school to be kind and not laugh at others when they fall down but comedians can laugh. Funniest Home Videos can give people lots of money for footage of someone falling down because it's apparently hilarious.

But my reason for writing isn't to pick on the comedians.

This social media age where people post what they think every other minute causes the words offend and offensive to be tossed around a lot. For example, someone will prelude a post on Facebook with, "I hope this doesn't offend anyone;" or, "This might be offensive to some people, but. . ." People are smart. They know if they start spouting off their opinions on a political or social hot topic they will get comments back from people who say they are offended. They know if they post certain jokes not everyone will laugh along. But people usually do it anyway. Why? Sometimes they want to offend just to get those comments so they can then reply and continue the thread: offend, retort, offend, retort. Who gets the last word becomes the battle. People might TYPE that they don't want to offend anyone, but they really do.

Now I don't believe it is wrong to speak up about political matters, news topics of the day, social injustice. I don't believe it's wrong to share jokes in person and online, and not just because of some free speech laws. I certainly don't think it is wrong to feel offended, because feelings are real and valid. But do we really believe we will change someone's mind/actions/beliefs by ranting about our offense? The comments, by known and anonymous people, just trigger more strong feelings when they blast back in attack. Does that mean stay silent? Sometimes. For the health and sanity of both sides. Think before posting: Will it bring awareness to an important issue or will it just cause more harm than good? Think before responding: Is there a non-offensive way to reply? And sometimes, can't we just hide/ignore the comment/statement/joke and LET IT GO?

It's hard, I know. I've participated in some discussions online and in person where I've realized I opened a can of worms that I should have kept sealed, or I've responded back in a way that others immediately saw as offensive and I knew, I really did, that it would cause strong feelings without helping anyone. We know all about the suggestions I just gave to avoid some of these situations, but naturally life shouldn't be spent walking on tip-toe to avoid offending others. It's a tightrope walk sometimes, and sometimes we just have to risk the fall and hope there's a net. But maybe we can start by checking our motives first. Do we really want to help/inspire/ignite a fire for good changes to come/laugh over something really funny, or do we just want to stir the pot? Next time I feel like stirring, I hope I just go make some soup and share it.