Mornings at our house start with specific words. My first word is five, followed by thirty, as the answer to Luke’s first words, “What time is it?” Geddy’s are usually the following, in this exact order, over the course of his first half hour awake: Mommy, milk ("mohk"), Daddy, cracker. He knows what he wants and he knows who will give him what he wants.

Lately, because Geddy seems to be saying a new word or ten every day, his first word of the day might be dark ("dahck"), or fan ("fant" or "f"), or bright ("bight")—if I decide to turn on a light while I change his diaper. He might say moon (which he has decided to start calling "moont") if he can see the moon out our window. This morning, the first word from his lips was diaper. The diaper wasn't much wet but Geddy knows that the diaper is always changed or at least checked before he gets any milk. His last word upstairs before we consent to starting the day and leaving the bedroom rotates between go and down. After that for the rest of the morning we can expect to hear cracker about fifty times, especially if Mommy says “all done” and Geddy is not all done. At least it sounds more like cracker now than crack.

During breakfast I listen to our son tackle apple ("ahp mol"), or peaches ("pshpsh"), and sometimes the odd word like fox. Yeah, that last one really doesn't come out right. He loves to say happy and start clapping, waiting for me to sing "If You're Happy and You Know it," and the other day he started saying clap. (By the way, now that Geddy is over a year old he is starting to use sign language, something we almost gave up on. He will sign more, please, and thank you, instead of just clapping for everything he wants.)

Thanks to Daddy, Geddy can say fork quite well, though doesn't know the difference between a fork and a spoon. Every utensil is a fork. When he's thirsty, just a couple of weeks ago he would smack his mouth and point to his water; now he says water ("wadder") and drink ("dink"). But the sippy cup is becoming SO yesterday. Geddy prefers to find any container ("cup") he can get his hands on and help himself to the water dispenser in the fridge. Some water makes it into his mouth, but most is happily splashed on the floor.

Once we leave the kitchen, if we ever really leave the kitchen throughout our day, we can expect Geddy to ask for music ("mick") and then go over and turn on the radio. He usually wants to dance and will tell Daddy, in sign, more please if Daddy stops dancing. Geddy also might want to go outside ("side") and take a walk, but first he will get his shoes ("shoe"). If we are not jumping on this idea of exercise, Geddy will say door and probably try to open it.

With luck, walk or not, when it is nap time Geddy might say bed, night, pillow ("piwwoah") or blanket ("bank") and most definitely he will say lambie ("ammy") and Pooh and be ready to snuggle down with his buddies. Today it was chair, because he has started enjoying sitting in his own chair when we read stories before sleep; and puppy, because he didn't want The Pigeon Wants a Puppy until I said it was time to nap and then he wanted to read it very much!

At meal times and before bed Geddy can be ready with an amen before the prayer even starts. He sometimes likes to run around the house saying amen. Such enthusiasm even shows up in his sleep.
One night Geddy woke me up yelling out "fly! fly!" Either he was having a fantastic dream about flying or he was running around swatting imaginary flies, a favorite game when awake.

Of all the words Geddy can say, my favorites are Mommy? hug, when little arms wrap around my neck, or around my legs when he runs up behind me. And Daddy, Daddy, Daddy, tickle, when Geddy and Luke are playing.

These words, with that little face and dimpled smile, make me glad to say five thirty every morning. 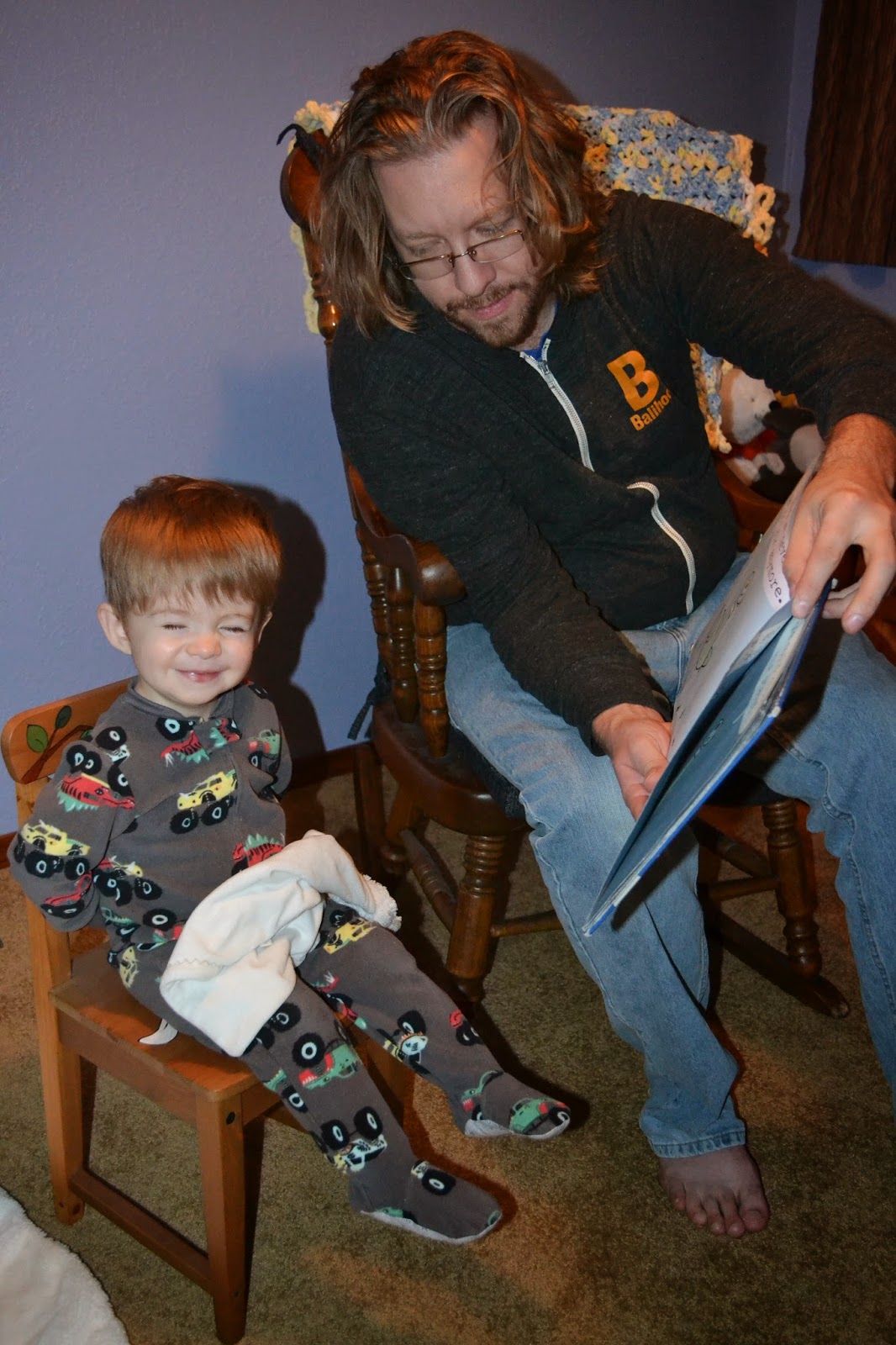