Just Keep Swimming: When the only open pool is a parking lot

Merriam-Webster provides a definition of resilience as "an ability to recover from or adjust easily to misfortune or change."

This word keeps popping up lately. The counselor lesson for the final week of school in Geddy's district was resilience. We sat and watched online as one of the school counselors read The Hugging Tree: A Story About Resilience, by Jill Neimark. A tree grows on a cliff, facing storms and dangers, but stays strong and determined through it all, largely because of the kindness of a young boy. The same day we heard this book, I signed into a Zoom session my friend, a speech language pathologist and professor, was presenting about stuttering in children and how to build their resiliency. I had signed in for the chance to "see" my friend and get a glimpse of her in professional mode, but I was surprised as she dove into the topic.

Her focus was on helping children who struggle with confidence and self-esteem because of their stuttering, but what hit me was that we can teach children, and even ourselves, how to become resilient. Sure, I'd kind of known that. Therapy, church, meditation, prayer, exercise, friendship-all these are about helping people feel loved and strong and work through their mistakes and handle stress. But how often do we either neglect teaching resilience or get it terribly wrong? How often do we casually throw around the phrase "children are resilient," as if to imply that kids will just automatically bounce back and they will be fine regardless of what life throws at them? How often do we rush in to say, "don't cry," or "buck up," thinking that burying the emotion in the moment is the way to get over the bumps in life?

In the past, most of the time I heard "children are resilient," it sounded like the wrong notes in a familiar song. I would think, sure, maybe some children are, but there are some scars on the soul that never fade. Why are so many adults screwed up? They have moments from childhood from which they didn't recover. When I became a parent, suddenly hearing, and even saying to others, "children are resilient," became an immense comfort because I didn't (and don't) want my mistakes to mess up my kid. (I sure hope he's resilient, because otherwise he's screwed!)

It eats away at me to dismiss children's feelings and tell them to "just get over it," when I, as an adult, don't want anyone saying that to me. I can't imagine any adult wants to be told that.

This whole pandemic thing, a likely reason resiliency is a hot topic, makes me want to watch what I say in regard to helping my family or friends through so much sadness and change. I'm not going to say, "buck up," but what if even saying "it's going to get better!" is the same as a slap in the face? What if I spew out, well-intentioned but ill-timed phrases such as "at least you didn't lose your job," or "at least your family is healthy"? I don't think that would teach anyone how to be resilient.

I think I'd rather join Dory, my favorite animated fish, and sing, "just keep swimming." Just keep going, don't give up. That's not much of a tool, especially for those of us who never learned how to swim, but it's positive without assuming anything or preaching. I mean, it could still be the wrong thing to say, but maybe if I can figure out how to wear the attitude-teach myself resilience-I can better share it with others.

It turns out that this week a bunch of children (innately resilient? explicitly taught by loving adults in their lives?) modeled resilience in a very literal Dory way. Though neighborhood swimming pools should be getting ready to open for the summer, our city has announced that they won't open at all this season. COVID-19 is cancelling a lot of fun, and it just keeps going. But as the city also spent the day flushing water lines, they inadvertently flooded a parking lot that has a clogged drain. As Geddy and I were heading out to play ball in the park, we noticed the massive man-made pond. Three kids, siblings, were already splashing away, and Geddy raced to join in. Soon, a father and three kids showed up in a car. Then another father and two kids rode up on bikes. Two more kids on bikes were followed by three others. Shoes came off, clothes became drenched, and parents waited on shore, shouting advice for keeping distance. My son shouted his excitement that he got to have a pool party for his birthday week. Two kids went home and came back with goggles and swam under water, the width of the lot. Yes, the water was dirty. Yes, some kids had trouble keeping that social distance. But there was joy. There was a moment in time that could be remembered not for what was canceled but what was created. It was hope. 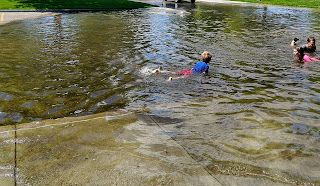