When I sit down on the couch­­–after exhausting my pregnant body whirlwinding around the house with the vacuum, the laundry basket, the dishrag–I think, What do I have to say to this blank page on my screen? My life story? My grocery list? Both sound plain to my thoughts' ears. Then a question from a different corner: What will my child ask me?

The countless Whys go skipping by, like a troop of children on pogo sticks. Why is the sky blue? Why can't I find the end of the rainbow? Why do I have eyebrows? Why didn't Daddy have to eat all of his salad? Why was I in your belly- did you swallow me? I imagine no pause between with any chance for my response. Then I imagine a great long pause at the end of the stream of questioning, a small and earnest face looking up at me, and a moment when I wonder if the questions need answering.
Do I answer scientifically? Do I make up fantastical responses? (The sky is blue because it's one eye of a great blue-eyed giant, whose pupil is the sun, who stares down at us through a magnifying glass to see what we do all day.) Do I say I don't know or I'll tell you when you are older? Do I say Ask your father?–great for the salad question. Do I say Figure it out for yourself? Do I smile and change the subject?–who wants ice cream?! Maybe all of the above?
What if my child worries like I do and did–even when very young? Why do we have to have money–Why can't people just do stuff for each other? Why do people get mad and hurt people? Why do other kids say mean things to me? Why do I have bad dreams? Why doesn't Jesus come? Yes. I will say why, too.
Maybe I will ask my child questions: Why do you keep growing taller? Why is your laugh contagious? Why do you have five toes on each foot? Why do you have your daddy's desire to take things apart? Why do you wake up at 5 every morning? Why do you love me so much?
And then I will write down all of his or her answers and fill my blank page with happiness and child insight. And maybe I won't vacuum, or do laundry, or wash dishes for one afternoon. Maybe two. 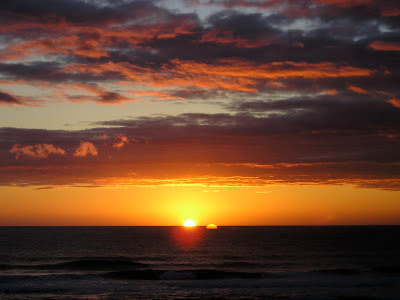 Posted by Words by Annie at 6:26 PM No comments:

The third trimester starts somewhere around now, and I reflect over the course of this pregnancy. The last few months didn't pass over like swooping swallows. They didn't linger like slugs in the driveway. This pregnancy, neither speedy nor plodding, just goes along its way. With nausea over and only mild current discomforts I sometimes get busy with work or daily life happenings and forget to think about my current state. Of course any scary story of pregnancy complications sends me to the internet and gets me thinking a little TOO much about what is- or might be- going on inside of me. And of course, too, Bump usually reminds me of Bump's presence. If Bump forgets to remind me, then I suddenly remember with great panic and hold my belly, maybe gently poke it, and wait for the reassuring nudge right back. Then all is well, I'm pregnant again, I smile and allow myself the extra bowl of ice cream, and I think about all things baby.

Lately when I sit beside wiggly six and seven-year-olds, I have a different sort of panic as I realize that Bump won't stay a baby forever. Bump won't even stay Bump forever. (Well, maybe, whether he or she likes it or not; nicknames do have a way of lingering). Bump will be five, six, and seven. I sometimes find that I want to study my students, like specimens under a microscope. I can't do that with Bump or my poor child will get some sort of complex. Anyway, the point is, I adore five, six, and seven. But they don't stay forever either.

Naturally, I don't want to stay pregnant forever and I won't want Bump to stay one age forever. I just alarm myself with these truths. Then I find comfort again.

It's like the sun peaking out this weekend. A blessing after our surprising cold, dark, and snowy January. I like dark and snowy, but I didn't want it to last all winter. Or maybe I just didn't want winter to last all winter. But, now, as I look out our window, I see the sun sneaking away again. Then I remember how much I dislike day after day after day of incessant blinding sun and heat in the summer. Yep. I'm OK with changes. I just need to enjoy every moment that takes shape before it passes away for good. 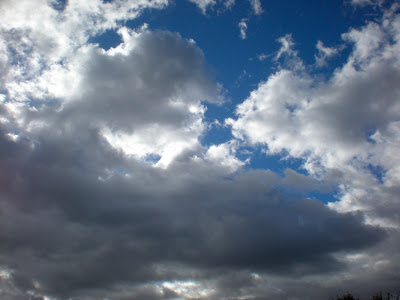 Posted by Words by Annie at 3:59 PM No comments:

Email ThisBlogThis!Share to TwitterShare to FacebookShare to Pinterest
Labels: Reflections, The Bigger Picture

My hero husband, though quite accustomed to giving me my daily injections, still can't stand needles, blood, or any sort of personal painful injury. He has a history of going into shock rather easily, which he has in common with some members of his family. So, "needles"s to say he's grateful that I get the "bee sting" every morning instead of him. If only we could find a way to put a positive spin on his spiral into unconsciousness.

It all started in first grade- well, before first grade- when he had to get immunizations. Simple, quick pokes, right? Over and done, Luke stood up, and then, and then . . . as he felt a little hot and blackness starting to creep into his vision, the next thing he knew he woke up on a bed.

A few years down the path of grade school- when I first met Luke- he was out in the furnace room with a couple of other students doing some cutting with a razor knife (yeah, we went to private school where we could do cool things like that). The knife slipped and skewered his thigh. One of the kids pulled the knife out and then the two boys started to help Luke into the school when one said, "We're losing him." Then Luke woke up in the boy's restroom on a cot, his pants off and a coat over his legs, and the teacher (my dad) standing over him checking out his injury. He ended up being fine but his leg still bears the scar.

His next vivid fainting episode took place during blood work before a sinus surgery. He wasn't donating blood, just giving a little sample, but it was enough to make the lights grow dim again.

Unfortunately for my hero, he would have to suffer through frequent allergy shots over a three-year span. Luke and family developed a strategy, however, to help him stay conscious. Don't look at the needle and have the skin pinched up really tightly. Oh, and only his Grandma Betty could administer the shots because Luke's mom had just as much trouble as he.

As an adult, Luke faces flu season with our family pharmacist, whose own son suffers from needle fear. With his head down and ample time to rest behind the little curtain when it is all over, Luke manages to make it through without hitting the floor.

My collection of syringes piles up, ready for disposal. It's too bad we have to throw them out after just one use. Hang on, brilliant idea forming-

Many a night as I toss and turn, snore, and cry out at odd times because my leg has cramped up or I am suddenly acutely aware of the spinning of the earth- the pleasures of sleeping with Bump- I worry that Luke isn't getting enough rest. If only there was something we could do to help him sleep. NyQuil should only be taken in moderation. And, well, you know, when Luke is actually sick. And I really don't want him getting hooked on sleeping pills. Hmmm. Maybe, just maybe, I should start saving my used needles!

Think of it! Luke can't fall asleep, or I have just rudely awakened him and he needs to fall back asleep because it is only 2:00 AM- what if I just grabbed a needle and gave him a quick jab in the arm! You know what would happen- he'd be out like a light! Problem solved. Now that's a way to reuse and snooze! 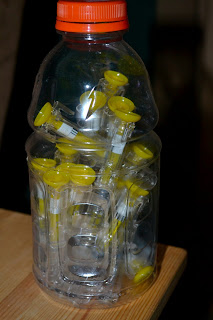 Boy or Girl? The Bump Question

In church not long ago, a baby girl would not stop staring at me. She didn't smile or frown, laugh or cry. Her mouth was slightly open. And she stared.

You know what this means? Her grandmother asked. You are going to have a boy. If a baby girl stares at a pregnant woman, the woman will give birth to a boy.

This is the first time I'd heard such a tale, but I guess the grandmother had proof based on a previous experience.

At work this week one of the teachers, a mother of two boys, looked my belly over and informed me that I would have a girl. I guess it's all in the shape and the way I am carrying Bump.

My sister and her cousin have been trying for a few weeks to talk me into asking my doctor or the ultrasound tech which side of my uterus implantation occurred so that they can know the gender.

Seriously, people. Luke and I don't want to know. Yet.

They say pregnant women have incredible dreaming experiences like no other. I have always been a very active, vivid dreamer, so I can't really say if my dreams while pregnant have been any more unique or bizarre than normal, but I can say that I have had a few dreams about Bump that fit into this whole gender question. My theory is that Bump is playing with my mind and giving me all sorts of surprises as I anticipate the birth.

Bump is born- a baby boy. He grows to toddler size in a matter of minutes, starts walking and talking, and remarkably resembles one of my first-grade students. He's witty and charming, a smart aleck, and oh, by the way, he's black.

Bump is born- a baby girl. She's so tiny she fits in the palm of my hand. She's perfectly formed and beautiful. I freak out that I will break her she is so fragile, but no harm comes to her.

I'm supposed to have leg surgery and the doctors accidentally amputate both my arms. Strange, but I don't freak out by this. My mother calmly tells me that my arms will grow back, and they do! (Yeah, this dream doesn't have anything to do with babies, but I think it was because my left arm went to sleep from sticking up in the air as I tried to find a comfortable position for it on my pregnancy pillow. So, you see, the dream was affected by Bump.)

Well, day-to-day when I think about Bump I can honestly tell you that Bump currently has no gender. Bump is Bump. Yes, we used to talk to Bump as if Bump were twins- a boy and a girl. But I think the ultrasound images have made us confident that there is only one Bump in there. Do I desire one sex for my baby over the other? No. I desire a healthy Bump.