Raising a child seems to come naturally to most mothers of the animal kingdom. I'm not sure how it works in the forests, the jungles, the deserts, but mothers just seem to know about feeding and protecting and teaching their young. Instinct. Yet humans, though self-proclaimed "Animals of Very Much Brain," spend a lot of time and money on instructing the moms of their species on what to do with babies and children. And even then, many, many moms (including this one) freak out about their grinning, sniveling, pooping, laughing, spitting, gurgling, howling, hugging offspring. You don't hear camels and hyenas stressing over whether their young are hitting the developmental milestones at the right time.

Then again, I could be wrong. Maybe all animal moms need help and advice from strangers at the grocery store / watering hole, the best-seller lists at the book store, and the endless websites online. OK, not sure what the animal equivalents would be for those last two. But what if animal moms have support groups, or weekly gatherings, where they talk over their child-rearing challenges? Perhaps it goes something like this:

Koala Mom 1: I only slept 20 hours yesterday instead of 22! Joey just would not settle down! I am so exhausted!

Koala Mom 2: I had the same problem with my Joey when he was that age. I tried wrapping him in eucalyptus leaves for 30 minutes after he would wake up. Worked like a charm!

Ostrich Mom 1: Little Chick is always stretching his neck up to the sky and never wants to bury his head in the sand. I'm worried about him.

Ostrich Mom 2: My cousin's Chick goes to a special school for that. I could get you the number. *

Blue Whale Mom 1: (to Mom 2) Your calf is looking a little peaked there. Are you sure he's getting enough milk?

Blue Whale Mom 2: He only gained 180 pounds yesterday, but the doctor said not to worry. Well you know me, I did worry! But I've weighed him three times today and gave him an extra feeding, and as of lunchtime he had already put on 190 pounds, so I think he'll reach the average by tonight.

Giraffe Mom 1: Stretch isn't living up to his name. His neck is 6 inches shorter than those of his friends.

Giraffe Mom 2: My Skye has the opposite problem. He's always getting his neck tangled in the tops of the trees.

Giraffe Mom 3: I read that it's all about how far they had to fall when they were born. The new recommendation is that mothers give birth while standing over a hole if the parents have short necks. If there is a fear that the baby will have too long of a neck, the mother should give birth over a pile of leaves.

Well, this human mom has to go change her offspring's poopy diaper. She just changed a poopy diaper five minutes ago. Do you think said offspring is sick? Should this mom research it online? Isn't there a book about poop? Maybe she should just clean him and stop worrying! 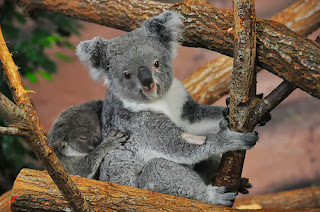 *Yes, I know that ostriches don't bury their heads in the sand. Laugh with me. :)

Don't Let it Come out Your Nose!

Luke and I started having a discussion last night about all those phrases our parents used to say–and still do–and that all well-meaning people say but that are totally unnecessary phrases if you think about it. I mean, yes, I say them all the time just because that's what we say. As if we believe that we MUST say these words or the worst of the worst will happen. But seriously. Think about it.

Drive safe! (Well I was going to crash into a tree, but you're right I should stay safe.)
Don't burn yourself! (OK, now that you mention it, I will NOT stick my hand into this pot of boiling water.)
Don't cut yourself! (Really? I was going to chop off part of my finger and put it in the salad, but you know, maybe I won't do that now.)
To a shy or introverted child: Don't talk to strangers! (Mom, I don't talk to people I know, but I was going to go up to that man with the puppy and candy and tell him my name, phone number, and address. Now I'm having second thoughts.)
To a teenage daughter: Have a good time at the party! (But all my friends will be there! OK, you're right; I should just enjoy it.)
Don't knock it over! (But I really wanted to spill grape juice on the carpet and get grounded! Fine. I'll drink it instead.)
Don't trip! (It's so tempting to just bust my toe and fall on my face, but I guess I could find something better to do.)
Don't slip! (But that's the best part about walking on ice across a busy street with cars driven by people who drive as if they don't know that it's winter!)
Don't fall off the roof! (But I was hoping to so that I wouldn't have to clean out the gutters.)
Don't cut your arm off! (But it would be so much more fun to spend the day in the ER instead of trimming the shrubs with a chainsaw!) (Our house not long ago.)
Don't forget to always wear clean underwear in case you get in an accident! (Cause otherwise just go ahead and wear the same pair for three days. But really, how will I keep it clean once I've been in the accident?)
Don't poke your eye out! (Classic.)

I'm sure we will tell Geddy some of these advice gems and then slap ourselves for being like our parents, but for now the only one I'm really telling Geddy is:

Don't let the milk come out your nose!

He's in the habit lately of getting very distracted while eating and he often likes to bend over backwards on my lap and look around and see if Daddy or anyone is watching him. He loves attention. (Not sure he will be shy, so the talking to strangers bit will be useful.)

Once, not long after he had eaten, he was on the floor on his back and I was up by his head. He tilted his head back to look at me and then spit up. He was soon sputtering and coughing and milk was streaming out his nose. His eyes were watering. I freaked and quickly turned him on his side and then picked him up, expecting him to cry and be very upset. What did he do next? He laughed! Silly Mommy! Having it come out my nose gets me lots of attention!

Posted by Words by Annie at 1:50 PM No comments:

Inside, a Star Burns

Inside, a star burns.
Indigestion sears my throat,
makes memories twinkle
as hot sparklers poking
their fire through my ears, nose.
My eyes aflame,
it grows, expands, begins.

Or does it end,
light years ago, inside me?
A roasting seed,
planted when I first took breath,
never to be born under the sun.

I am its black hole. 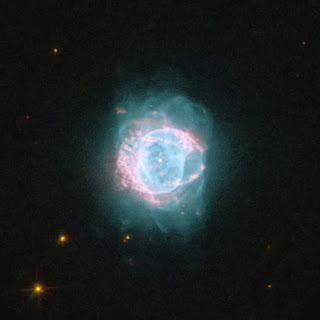 Posted by Words by Annie at 8:54 AM No comments:

Email ThisBlogThis!Share to TwitterShare to FacebookShare to Pinterest
Labels: Writing

Most of the time I could do without chores. Cleaning the bathroom and vacuuming hit the top of my list of least favorite activities (oh, and grocery shopping). But want to know what pretty much never happens here? Dusting. Sometimes I see the dust and then remember that I should do something about it, so I wipe the top of the speakers with my sweatshirt. Yeah, while I'm wearing it. Then I forget about it all for another month or so.

I'm a little too particular about cleaning up my brain lint, however. I can't stand to have cluttered, "dusty," disorganized thoughts. So I'm constantly going through them, wiping them down, and putting them in rows, columns, and alphabetized files in my head. But I can't seem to let some get so dusty that I swipe them from existence. I find this highly irritating about myself. Why do I need to hold onto that stupid memory of something I did or said that I regret? It's like keeping a half-eaten sandwich bought in the airport that I will never finish because it's gross but I feel bad about throwing it away because I paid a good load of money for it. Why do I need to go over and over my list for the coming day while I'm feeding my son at 1:00 AM? And then, when the day is over and I admit that I missed completing some items on my list, why do I have to re categorize them to fit the following day's schedule?

All this mental maintenance causes me to sometimes want to sell everything and move to a bark hut. OK, I would miss electricity, and running water, and, hey, how would I post to my blog? And just because I was suddenly out in the middle of nowhere doesn't mean I wouldn't constantly be going over how bad I felt when I didn't smile at the friendly little chipmunk and maybe I should go take him some treats. Dang it! It's 1:00 AM and I didn't make peanut clusters for little Chip–or Dale–I must do that tomorrow. File under P.

Well, becoming an adult brought a lot of responsibility with it (funny, I don't remember saying when I was little that I wanted to be an adult when I grew up.), and becoming a mom brought tons more. More lists. Yes, you've heard it all before. You may have done it all before if you are an adult or a mom such as I. (And if you are my mother, NO, it is NOT YOUR FAULT that I live my adult motherly life this way. Well, maybe just a teensy weensy bit. Hey, take credit for giving your daughter an amazing work ethic and an empathetic spirit–yes, I blame you for my attributes!). You may even go above and beyond what I do and use Pledge when you polish up your thought files. (Incidentally, does it irk you too as you remember the joy you had playing house when you were little and how you loved getting a toy broom or toy vacuum for Christmas so you could clean "just like Mommy and Daddy" did? What were we thinking!) Yes, responsibility has a lot of lows.

But on the positive side, I do spend much of my days lately engaged in happiness and not just up to my eyeballs in stress about what I should be doing, should have done, should do tomorrow. I get down on my tummy to laugh for ten minutes straight with my little boy; I read books about Winnie-the-Pooh and typing cows and then read those books backwards–very poetic; and I examine all the types of leaves on the trees as Geddy and I walk.

So how do I learn to dwell more on those happy moments than on my lists, my faults, my regrets? How do I learn to "let things go" in the same way that I let dust build up in my house? How? HOW? HOW?

Maybe I should just go to the beach. :)

But seriously, as the chipmunk story proves, my thoughts just go with me wherever I go. The dirty stalkers! So, maybe you can help. Please, if you see me staring off into space and I look as if I'm roaming the organizer aisles of Staples, or if you catch me wordlessly chewing myself out for doing that "stupid thing," (like I might be hitting myself or something. I dunno) remind me to ditch the dust rag. 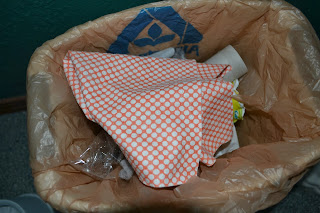 Posted by Words by Annie at 2:17 PM No comments: