There's a part of the greenbelt unpaved and closed to wheels except those on a stroller. We live close enough that our frequent walks include this stretch of trail. It's refreshing to leave signs of the city and enter a veritable bird sanctuary by the overflowing river, even though large homes—nearly mansions—overlook the path.

Of course the ducks get noticed first. There are the usual mallards and those crazy wood ducks who surprised us one day by flying down from the trees. I somehow never knew before that some ducks do spend time in trees. Then we see the Canada geese (do they ever go to Canada?) who manage to show up everywhere in town and out. (I remember a time when I was waist-deep in a lake helping to catch these critters so the Fish and Wildlife guys could band them—another story for another blog.) But it's hard to miss the great big white monstrosity with the long neck and "charming" personality—especially when the long neck is coming after us.

I remember running. And screaming. Well, maybe not screaming but running and thinking of screaming. I chose flight and Luke chose fight. He stood his ground with an angry swan. Neither won, but we now have a healthy respect for this animal and his territory. I take pictures but try to keep my distance.

We really can't predict how the swan will react, except when it comes to the two miniature horses grazing on the lawn across the pond. Mr. Swan will leave his wife, nest, and children to motorboat his way a great distance, clamber onto land, and chase down any horse who dares to inhabit the wrong space. If, after getting back in the water, the swan notices that the horse has not gone far enough away, the white powerhouse will surge forth again until the four-legged creature is out of sight of two-legger land. Let me clarify: that's feathered two-legger land. Luke and I are bipeds often unwelcome in the bird zone. We have also heard the occasional pedestrian going by, saying to a friend and pointing, "And that's where the swan attacked us." 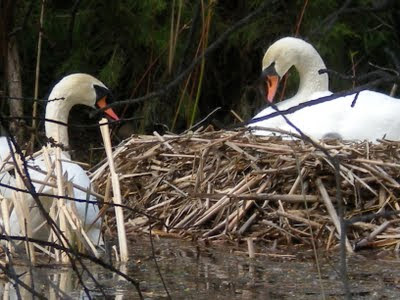 Lately the swan has been more subdued. We get to see his softer domestic side. After the children had hatched, we got to observe the father near his nest doing what appeared to be some sort of housework. He was moving reeds and twigs in the water from one place to another as if to get more nest material or clear the water so that his children could swim without getting entangled. He let us watch the little ones and seemed to ignore our presence. That's a huge difference from all his previous snarky behavior. 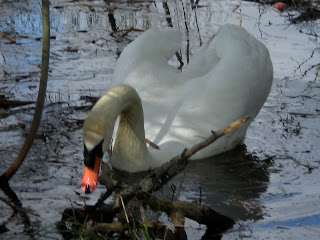 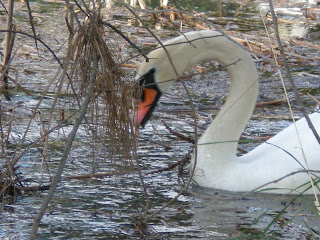 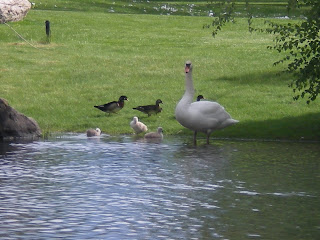 Update: Recently we've gone back down the trail always looking for the swan family and mostly viewing them on the other side of the water. I'm kinda bummed that we don't get to see them up close any more. One day, of course when I forgot my camera, the whole family was camped out on the edge of the trail mostly tucking their necks into their feathers, trying to take a nap. Mr. Swan eyed us a bit, then let his sleepy lids close, then snapped them open again, but there was no hissing. The very last two times we have found ourselves in his territory, however, he has been absent. We see what we assume to be the mother, swimming around with the kids in tow. What has happened? Did one of the horses finally have enough of being chased around by a bird and attack him? Did one of those redwing blackbirds cling to his head and peck him to death? (Yes, we watched one of these birds viciously going at the mother, and I don't think he was just picking bugs off of her!). Well, I hope he's okay and comes around again. I'm looking forward to next year's protective antics when new eggs are laid.
Posted by Words by Annie at 7:33 PM No comments:

Email ThisBlogThis!Share to TwitterShare to FacebookShare to Pinterest
Labels: Reflections

The Latest from Batty

Batty is hanging from the monkey bars.

"I thought your name was apple because you eat apples."

"I saw you at breakfast eating an apple."

(I think about the apple still left in my bag, not eaten that day.)

age: five
my unspoken nickname for her: Batty
(shout out to the youngest girl in The Penderwicks)

Another Day
When I told her not to touch the fertilizer pellets on the grass that are there to help make the grass grow:
"Well I'm touching them!" (with her shoe.)
I said just not with her skin (some kids had thought it was rock salt).
"Why, will it make my feet grow?"

Another Day
On the playground, mock fear as she stood on the jungle gym about to slide down on some bars.
"Oh! I'm so scared; I've never done this before. I'm so scared."
Whoosh.
Again.

Another Day, Another Child
age: 5
"Nachos is a weird word. I don't like it."

Another Day, Another Child
age: 7
"I wish my name was ABC."

Well, they can be.

Well, the idea of them is creepy.

"I like when spiders scare me. One time I was outside going to the bathroom near a spider's home and a daddy longlegs came out and I screamed and jumped (he demonstrates). So then I ran back inside—
and that's where I pulled my pants up."
Posted by Words by Annie at 10:07 AM 2 comments: