What better way to welcome the season of thunderstorms than in a tent? Our weekend of camping started with deciding it might not happen.

Luke sat down across from me at the table and said, in all seriousness, that we needed to talk about whether we would join our church campout or not. I knew the forecast promised moisture and rumblings, but I still wanted to go. I told him we could always come home if it got really bad. He agreed and we continued our exhaustive preparations, or, as Luke liked to call it, "a lot of work to go relax."

I figured as long as our new tent kept us dry then we had nothing to lose. But in the back of my mind I wondered how Geddy would like being trapped in a fabric box while storms raged around us. He had survived "tunder" before, listening curiously from inside our house. He had also splashed excitedly in raindrops that settled a bit after a downpour. But he had never slept in a tent, even in dry weather. Would he sleep at all? Would we?

Sweaty, grumpy, and already tired, I was thankful Luke said a prayer as we finally got packed and pulled out of our driveway. This is supposed to be a fun trip, I told myself; so let go of all your cares. Of course, once we had our Starbucks and some food, and Geddy was sound asleep before we even got out of town, we were quite happy and I felt the excitement return.

When we got out of the brown and into the green of trees and Geddy woke up giggling and talking about the mountains, trees, and "waves" in the river by the road, and I truly felt good about our decision. Then we saw the sheets of rain falling eight miles ahead of us—right at the campground—and I wavered again. We were crazy! The rain hammered our vehicle, turned to hail, and drummed along as accompaniment to the thunder while we sat in the parking spot by a fire pit and a picnic table.

I snatched Geddy from his seat and pulled him up with me and we waited. Surely there would be a lull soon so we could make camp. In the meantime, it was too boring in the car so I decided to change Geddy's poopy diaper while he stood on the floor in the little space in front of my seat. And here I thought it was hardest to change a diaper with a squirmy toddler who won't stay on his back! I can't wait to try this on an airplane!

My fearless husband, who had just purchased a new tent that is not only bigger than our other one but sets up instantly, got the tent up and the bedding and bags unloaded without too much rain damage. (I joked that what everyone outside didn't know was that we had a Harry Potter tent.) Then Luke also disposed of the soiled diaper so Geddy and I wouldn't have to stay locked in the car too long with that stench. He continued his heroics, helping others set up their tents in the rain while Geddy and I read books in the tent.

We didn't get a lot of time outside the first night, but we got fed, stayed safe, and answered Geddy's every-five-minutes question of "What's dat noise?" with honesty and humor. "That's thunder. That's someone talking. That's a car door slamming. That's the sound of Cindy wishing she was in a hotel room."

I'd like to report that because we stayed safe and dry, and because Geddy wasn't scared and upset, that we had a great night of sleep too, but, alas, it didn't work out that way. For one, I didn't arrange a bed for Geddy so he slept on our mattress between us. And even though I told myself I could stay on my back all night, with my one little strip of space, Geddy doesn't like to stay in one position or one place while he sleeps. He was back, to tummy, to side, under blankets, on top of blankets, and then happy to be head-to-toe with us at the foot of the bed. I was roasting and knew that night number two would have to be different.

Our decision to camp was rewarded with most of a day to explore outside in sunshine and clouds on Saturday. Geddy got to dig, collect rocks, follow dogs and point them out to me, follow girls, go around and around the campground, play Thomas the Train, and pretend to be a dinosaur. We had church in the warmth, shared food together in one of the yummiest potlucks ever, and had a beautiful day waiting for the next storm.

Yes, I felt that we were just waiting. It would come. In the meantime, Geddy refused to nap though we played a lot in the tent, and Luke got to set up his antenna and listen to the world without attracting lightning to his pole. When the rain hit again, Luke played his guitar inside our tent and I sang a little, here and there, between two-minute snoozes. Geddy put himself to bed at about five o'clock, before dinner, and showed no signs of waking nearly two hours later. Not even rolling thunder caused him to stir. He created a little storm all his own, however, when I got him up. Mr. Grumpy Pants might have slept all night, but I worried that he wouldn't, so I dragged him out of his beloved tent and snuggled him in a blanket until he was happy and awake enough to eat. Then he was off chasing dogs and girls again.

That final night, settling into our tent, I made Geddy his own bed and told myself, OK, the worst of the storms are over, we are very tired, and Geddy has his own spot so SURELY we will sleep. Turns out this time I was cold and Luke was uncomfortable. Geddy slept like a rock. Well, he still tossed and turned some, but he didn't complain.

Let's just say that the following morning when Luke suggested we pack up and go into town for a hot breakfast, I was all for it. 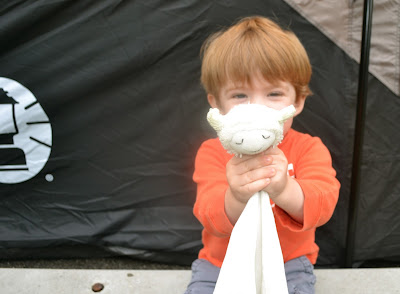 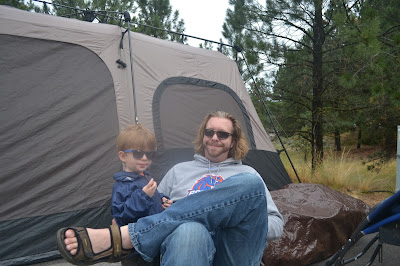 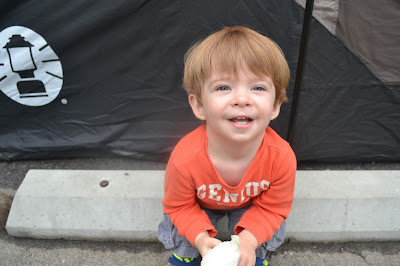 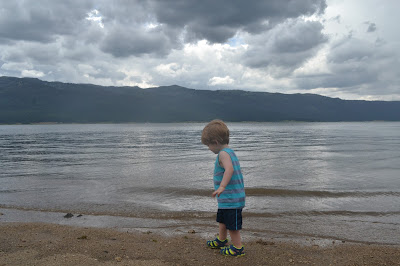 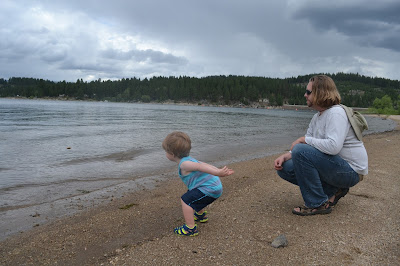 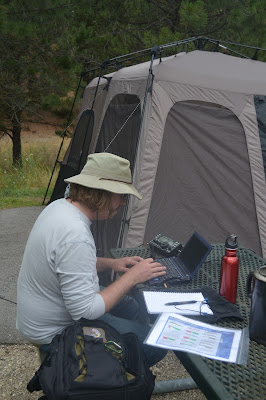 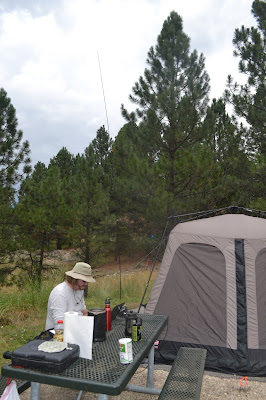 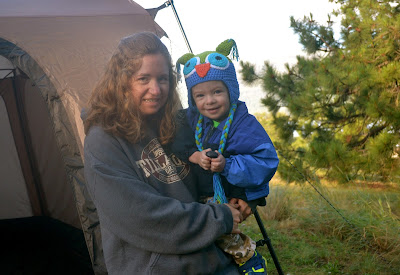 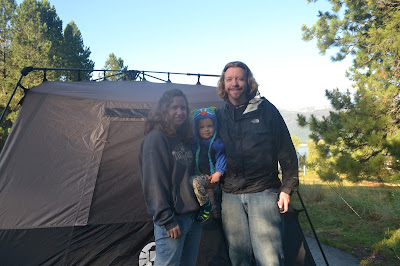 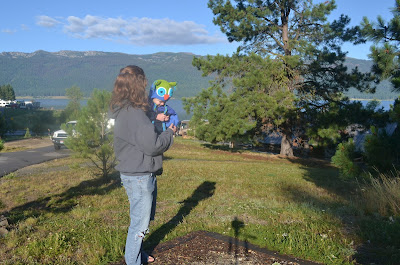 So what bothered Geddy the most? It turns out the blare of our car alarm when he punched the panic button and I took forever trying to figure out how to turn it off concerned him greatly. Geddy talked about the "beeping" and how it was "all gone" for about 20 minutes. He slept soundly through lightning cracking over our very heads but stressed about the car horn beeps. I shouldn't be surprised. With a few additions and modifications, I think we are ready for camping trip number two! Thunder, bring it on!
Posted by Words by Annie at 2:51 PM No comments: