Thunder, hail, and rain on our first tent camping experience with our son didn't deter this family from a second adventure under the stars. If we could live to tell—and laugh too—then we believed it could only get better from there. So we packed more blankets, more radio equipment, and more tents and sleeping mats and talked a few grandparents into joining us in the woods for another summer escape.

Trip number two started out so well. We had the Kia loaded on time and Geddy slept the first two hours of the drive. When he awoke, he was excited as before to be out on an adventure, only he kept talking about a storm. No, no, not this time, we laughed. No rain, no thunder. I think he was disappointed. We passed a lot of cows as we got closer to the trees (giving Geddy plenty to "moo" at) and even saw a few once we turned onto the "bumpy" road that Geddy liked so well. Then, as Geddy looked for "waterfalls," I tried to not look out my window as the world dropped off and everything went down, down, down. Meeting other vehicles on the narrow way made me glad that Luke drives so well.

We rolled in with the dust at the perfect time to meet my parents, who had snatched up a prime spot with space enough for all the tents and close enough to get to the creek but not so close that Geddy would fall in after stepping out of the car. I'm not certain but I think my dad and Luke set up antennas before the tents while Geddy and Gamma went straight to the water to throw rocks. In a little while, the camp set up complete, Geddy started finding rocks to climb on and jump off of while brandishing a stick wand and hollering "riddikulus" for about 20 minutes. Gamma taught him, cause you never know when a boggart might come along. 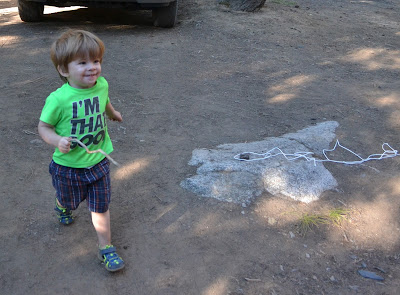 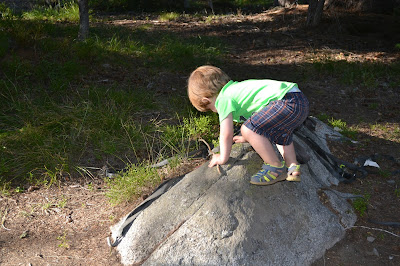 Supper time came, and cleanup, and before we knew it, bedtime. I started settling Geddy into the tent where we reclined on the big air mattress and read books by flashlight. I think Geddy would like to always read by flashlight now, even at home. For this time around, we planned to have our son sleep on his own space, so we laid out several blankets and put him on top and then covered him up. Geddy had other plans, and ended up falling asleep between us. No matter, I said, I will just move him once he is totally out. I did, he stayed asleep, and we slept all night and woke up refreshed.

The true story involved a mom who couldn't sleep, had to go to the bathroom numerous times and cursed herself for drinking hot chocolate before bed, and who couldn't stop checking on her son because it started getting colder, and colder, and colder. Within an hour or two after Geddy fell asleep he was hollering and wouldn't be soothed until I put him back in our bed. Then, every hour when he wanted to roll over and couldn't move because of being jammed between his parents, he would holler again, say "NO!" if I tried to help him, and finally calm down after about five minutes. And Luke and I got colder, and colder, and colder. We had no clue it would get into the 30s that night, and snuggling for body heat doesn't work with a squirmy toddler who doesn't like to be confined but refuses to sleep in his own bed.

I don't think morning ever came.

Ha ha, OK, it did, and my dad built a fire, and sometime by noon we got warm. Luke slept a few hours after warming up in the car, and Geddy and I played a game of getting warm in the car, then by the fire, then in the car. But by midday we had forgotten all about the bad night and decided to stay another. We are that crazy.

The gorgeous day warmed us and wiped the sleepy from our eyes, so Geddy, Gamma, and I hit the beach while Papa and Luke did some radio business. 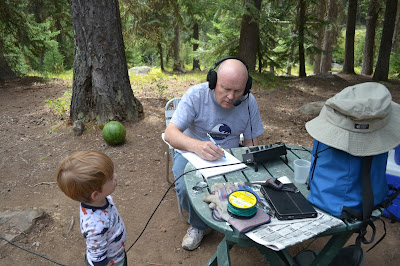 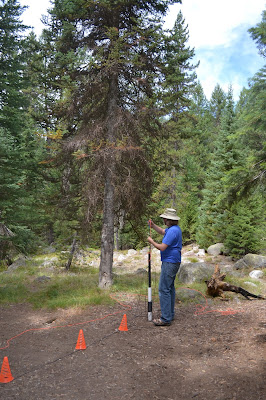 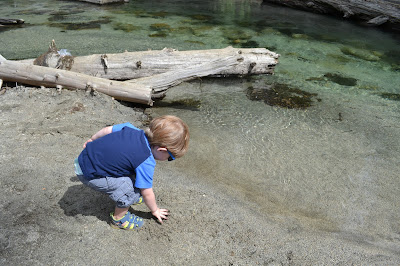 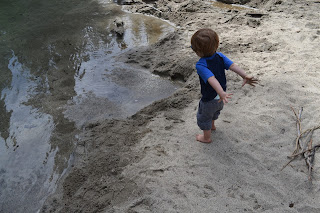 Geddy found heaven: Dirt to throw, rocks to throw and climb, AND a beach with sand to throw. 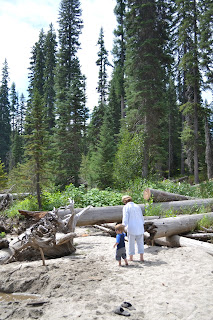 In the afternoon I didn't know if Geddy would want to nap, but fortunately trekking around the woods and creeks wears out little boys. The tent, wonderfully warm, cradled the both of us for the most amazing sleep. I wanted to zip it all in so the night would be warm too.


Later in day two, Pappy and Raine arrived with dog Blue. Geddy couldn't have been happier with all the attention. We continued our Geddy watch, making sure that whoever was in charge of Geddy was fully aware. Sometimes I would call out, "Do you have the Geddy?" and wait for a grandparent to respond in the affirmative before I let the boy out of my sight. 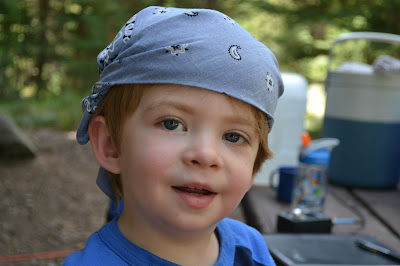 (How could any of us lose track of this little dude? After I took his picture, Geddy wanted to see. He looked at it and frowned, tore off the bandana and said, "NO! BanANA!")

Before I knew it, the night appeared. This time we put two sleeping mats on the floor of the tent, covered them with blankets, and snuggled a Geddy down beside our bed. Sleep WOULD happen for ALL. It wasn't so bad. Ten or fifteen degrees warmer than the night before helped. Geddy somehow still ended up on the mattress beside me, but I caught a few winks before that.

Our last day in the woods was a beautiful Sabbath. "Raine" came to the rescue so we had good pancakes, we took another trip to the beach, and Geddy gave the sermon. I wish I'd gotten a recording of him running circles around the picnic table, stopping to stand on a stump, and shouting out all the while, "Ladies and jumpin'." Geddy also led the efforts to find Blue when she disappeared. He could be heard calling "Blue! R you?" Fortunately she was found safe and sound in the car, afraid that it would leave without her. 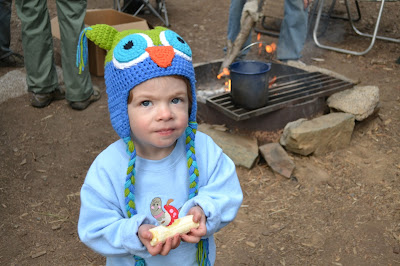 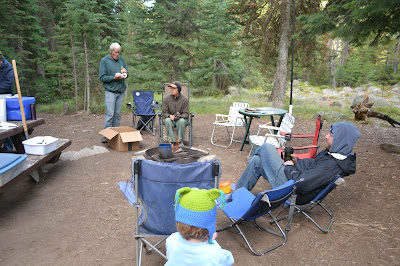 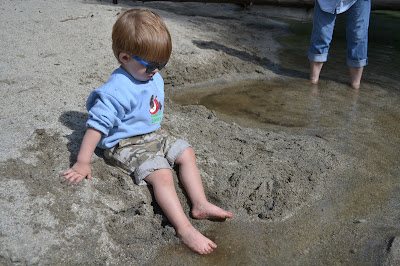 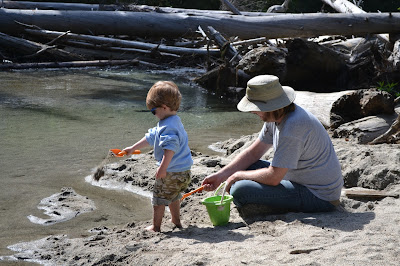 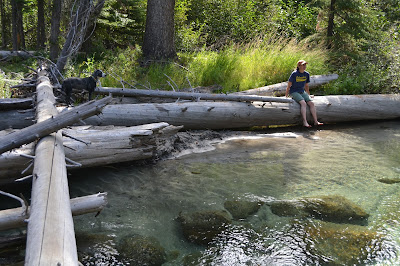 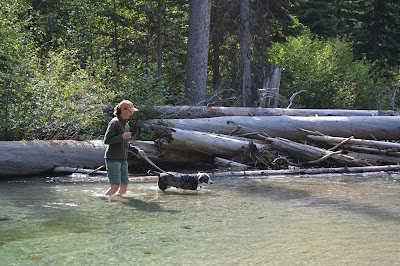 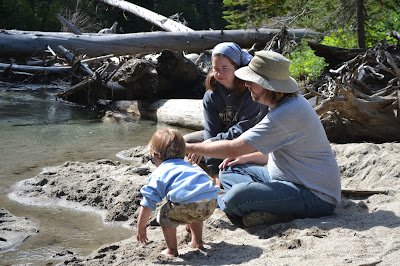 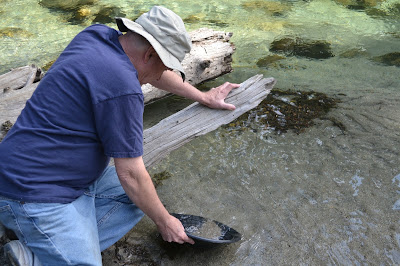 Rolling out of camp to drive home, dirty beyond belief, worn out but happy, we had no idea the destruction on its way for the beautiful woods. As I write this, so many days after our camping fun, the fires rage. I don't know if our very camping spot is going up in smoke, but I hear that evacuations have been issued for that area. Mom called me the other day saying she was so glad we had gone camping when we did. I look through all our pictures and realize that the mountains can recover, but it will take ages and nothing will ever be the same. I just continue to pray for the firefighters and all those in the path of these vicious flames.

Posted by Words by Annie at 8:45 PM No comments: