Before a baby enters the world the parents either get excited about all the "baby stuff" they get to buy or they become overwhelmed. OK, maybe both. It could be: "Ooh, which crib will best complement the nursery motif?" or "I just looked at 70 types of baby swings–I think I need an aspirin!" It was a little different in our house.

Neither excited nor overwhelmed about baby gadgets, we busily fended off the barrage of questions about how we were going to decorate the nursery if we didn't know the gender of our baby. Sure, I was stressed but not about bedroom themes and colors. I figured we needed a bed, some diapers, and some onesies. Gender didn't matter when choosing these items. I also figured that as we got to know our baby and as our baby grew we would gradually acquire other items.

Well, the day I planned to go home from the hospital, I started to panic. I didn't suddenly want a ton of baby furniture, but I realized some more items might make adjusting to baby Geddy in the house a little easier. So I sent off my research-everything-before-buying husband and my buying-and-giving-is-my-love-language mother-in-law to Target. Since my husband was barely staying afloat on coffee after surviving 30+ hours without sleep, a flow of strange new emotions that came with becoming a dad, and a migraine, he was not in the research mode at all but the shopping-in-a-store-is-the-worst-activity-ever mindset. With his happy shopping mother along, LOTS of items went into the cart. Maybe two carts. I came home and hardly recognized our living room.

But it turns out that I didn't need to panic. Here is the happy truth of life with Geddy in the early days and even continuing into the now. Yes, he's spent some time sleeping and swaying in his swing. Yes, the bassinet was a life saver for many naps. Yes, our backs are missing the changing table (Geddy got too big and heavy for it and now we just use the floor). But where has Geddy spent many, many happy moments? Where did we, and do we sometimes still, turn when he just wouldn't be soothed, or when Mommy just needed some uninterrupted sleep? The super deluxe, all-in-one, not found in stores, priceless Daddy-O-Matic. Versatile, equipped with numerous songs from a variety of genres, capable of making the best white noise, entertaining with funny faces and stories, the Daddy-O-Matic mostly comes with an abundant supply of unconditional love. And hey, just check out the following features the Daddy-O-Matic can transform into.

When Daddy and baby just need to lay back and chill: The Decliner (Daddy recliner) 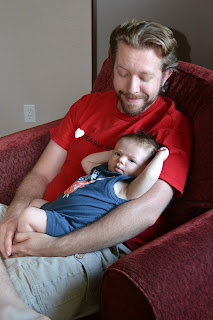 When baby refuses to go to sleep anywhere else: The Drib 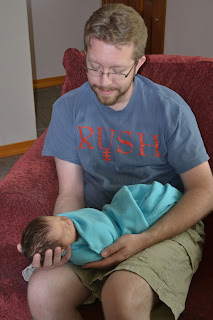 When baby needs a little gentle motion for sleep: The Docker 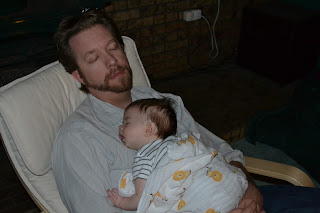 When baby wants to have a little fun: The Dwing 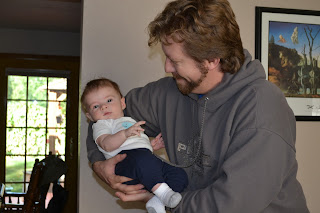 No, we don't plan to keep all the Target purchases from that first day, but our all-in-one baby must-have will not be for sale on Craigslist when Geddy gets older.

Posted by Words by Annie at 1:50 PM No comments:

Grandeur can illuminate the sky with lightning, openly visible to thousands of people, but sometimes it tiptoes by us and sometimes hides. We have to search or let it surprise us. The shimmering colors on the scales of a fish. The glint of gold in a human eye. But mostly, we ought to remember who made it so.

They say Michelangelo “discovered” the wonder of David hiding in a rejected block of marble and set him free. Had David hidden because of his nakedness? But he stands powerful and sure of himself, not ashamed like some ancient Adam. This masterpiece, resting cooly in the Galleria dell'Accademia in Florence, Italy, hides no longer. My friend and I found him surrounded by tourists and cameras. But David is a silent celebrity, camera shy. The blaring announcements every few moments emphatically prohibited photography, and docents paced the floor, wagging their fingers at anyone removing a lens cap. We didn't risk the photos, unlike the rebellious guy to our left. He cradled a camera in his palm, holding it nonchalantly by his side, and swiftly snapped a photo while he gazed in the other direction. Just outside the doors people peddled postcards, T-shirts, and even small figurines of David, picture perfect down to the precious details. Could a haphazard photo capture the wonder of David better than such quality merchandise? Could it capture the grandeur?

My compact point and shoot had always been at the ready to preserve memories of travel abroad, but in the galleria a pencil and a piece of paper seemed more appropriate–and legal. So I drew David, more to amuse my friend than anything. In quick sketch I copied the shadows, the turns. Eleven years later my friend still has the picture. It causes her to laugh. Laugh over my attention to detail, laugh about the stories of our trip together. We don't have a photograph of the real David and we didn't buy any tourist trinkets, but we have a little bit of him that no one else can ever have.

Around the city, the tourists flowed with the heat wave from one masterpiece to another. Almost every person we walked by was a tourist with a camera slung around her neck. (Yep, I was also guilty). One day we visited Michelangelo’s final resting place and cameras flashed there, too. In Paris, the Mona Lisa had hidden behind video cameras and the backs of many heads. She still smiled. Most people fought their way to the front of the crowd only to snap their photo and move on to the next work of art. How many took time to really see her?

Italy blooms with other beautiful creations, including more Davids. Two (I think now three) replicas exist in Florence and anyone may photograph them. I admit that I did, so what is so special about the real one? Are the others not beautiful, too? Maybe the real David isn't even there anymore. Maybe he watches behind one of those transparent mirrors, or perhaps he got disgusted with all the illegal camera flashes and long ago caught the train to Rome, eager to blend in as a tourist himself. Imagine David walking along with a camera. What beauty would he choose to photograph?


I wonder: Is a statue beautiful? A painting? A building? Aren’t they just interpretations of the real beauty that we cannot contain? In the case of David, are we truly in awe of him or the ability of his creator? When the lightning cracks and the sunset bleeds through the sky; when the bird hops by our feet and the baby's hand curls around our finger; do we appreciate the maker of all grandeur?

The world is charged with the grandeur of God.
It will flame out, like shining from shook foil;
It gathers to a greatness, like the ooze of oil
Crushed. Why do men then now not reck his rod?
Generations have trod, have trod, have trod;
And all is seared with trade; bleared, smeared with toil;
And wears man's smudge and shares man's smell: the soil
Is bare now, nor can foot feel, being shod.

And for all this, nature is never spent;
There lives the dearest freshness deep down things;
And though the last lights off the black West went
Oh, morning, at the brown brink eastward, springs--
Because the Holy Ghost over the bent
World broods with warm breast and with ah! bright wings.

Posted by Words by Annie at 1:12 PM No comments:

Email ThisBlogThis!Share to TwitterShare to FacebookShare to Pinterest
Labels: The Bigger Picture, Writing

Clinging to the Good

I won't say that I read the Bible much, but sometimes I read it with my pen and notebook handy, and sometimes I actually pay attention. Thanks to the embrace of a neighborhood Bible study, I'm paying attention a little more lately. A few minutes ago I read Romans 12:9, which states: "Love must be sincere. Hate what is evil; cling to what is good" (NIV). This verse comes in a section with the heading "Love." The final words of the chapter: "Do not be overcome by evil, but overcome evil with good."

Where did my thoughts immediately travel? To Meg and her brother Charles Wallace, somewhere in space trying to find their father, trying to get home, trying to resist evil. Meg broke the spell holding her little brother by saying over and over that she loved him. She couldn't fight the evil any other way and win. This, I believe, is because good is God and love is God and only he can conquer evil.

How do I do that? I could follow a list of what it means to do good and shun evil, but what if it just made me a delusional Pharisee? Do I even know what is evil in my life? I can list off the great and terrible evils that even our society puts a black mark on and imprisons people for, and I can say that I'm not involved in those so I must be avoiding evil. I think those crimes are despicable, so I must hate what is evil. But am I just living on the outskirts? Maybe the evil isn't in my life but could it creep in? "Love must be sincere." The whole list of how we ought to treat one another, especially our enemies—I want to follow that sincerely. I want to continue to abhor evil and keep my focus where it should be.

Easy to do, yes? Here I am in my blessed little life with a caring, loving husband and a happy little boy. But IT tries to sneak in and tell me lies about myself–that I'm not taking care of my family the way I should or that I'm not worthy of such blessings. Well I don't want to cling to that nonsense. I think I need to get the focus off of me.
Posted by Words by Annie at 6:29 AM No comments: