My son and I take lots of trips together. When he was but days old we visited Africa and the endless desert and met a boy there who was from another planet. Weeks later, we trekked through the Appalachians and also traveled by boat, encountered a giant bear, and listened to the story of Pi. And a few days ago, we gathered pinecones in the Hundred Acre Wood, stopped by Pooh Corner, and went on a grand "Expotition" to the North Pole. I had been to most of these places before, but not for ages. Taking Geddy made the journeys more real than I have ever imagined. And I have always had a healthy imagination. Or at least I did when I was young.

The favorite trip by far, and one that we will take again and again, was to see Pooh, Piglet, Eeyore, Rabbit, Owl, Kanga and Roo, Tigger, and Christopher Robin. I've known these characters since I was quite small–perhaps not as small as Small, Rabbit's relation, but since before I could read. Geddy and I took our trip by the same route that I've always taken–through the battered paperbacks my dad gave to me for my 4th birthday.

We watched Pooh sail in the air pretending to be a rain cloud, then get stuck in Rabbit's front door because he ate too much honey. Piglet showed us how a "Very Small Animal" can be a hero when he got out of Owl's wrecked home and went for help. When poor Eeyore lost his tail, we cheered that he found his smile when Christopher Robin pinned the tail on him again. Rabbit tried to get Kanga and Roo to leave but ended up becoming Roo's best buddy, and for that we were very glad because Roo is a very happy little guy. When Rabbit also tried to lose Tigger, er, make him less bouncy, we laughed because Tigger found a very lost Rabbit and also won his friendship. Owl taught us how to spell his name: WOL, and Christopher Robin shared his "silly old Bear" with us while he was gone to school.

No matter how old we get, or how many years go by, we can always go back to visit Pooh and friends because "in that enchanted place on the top of the Forest, a little boy and his Bear will always be playing." 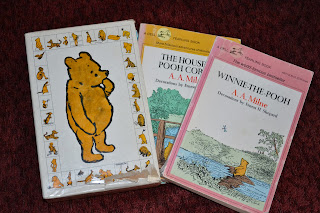 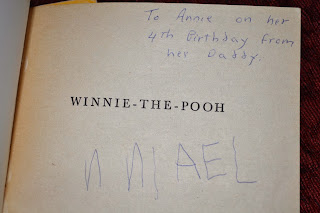 Posted by Words by Annie at 2:20 PM No comments: