"Making Friends With Shadows on My Wall"

"Daddy, I need my hat! I left it in the car!" My son's first words as he woke up to the rat a tat rain on the trailer roof and two sleepy parents on either side of him. Minutes later he was off the bed and going to the door saying, "I go get it. Be right back. I come right back!" No, nope, wait, I mumbled. Even though he had let us sleep in after a full day and a late night up, we were not ready to dash out into the rain so he could play, or get a hat, or see his cousin's sheep. I found a flashlight on the counter and handed it to him, then slumped onto the pillow again.

He started to explore the closet and pull out more pillows that he said I needed. Then he sweetly threatened to turn on the light above our heads. No, no, not yet; I covered up the switch with my hand. "It's not dark anymore!" He answered back. I don't care; I'm not ready to be awake.

Soon I saw the flashlight orb on the ceiling, light swirling around while his fingers danced. I got sucked in despite my sleepy state. What's that? A bird? "Yep, you got it!" He laughed maniacally, "Muah ha ha ha!" We had brought along our mad scientist apparently. From bird to dinosaur the shadow puppets flitted this way and that with an occasional flash of light in my eye. Not in faces, I reminded him.

Why, I wondered, did I have to lose this innocent joy over small things like flashlights and shadows? It stinks, this growing up, where worry washes over every surface. Right now, as I remember the events of our hectic weekend—the fun and the frantic—my boy is playing with a piece of fluff on the floor. He blows it around then calls it his marshmallow. Before that he was making paper airplanes and taking them to the bathroom in the cupboard. It's the simple and the silly that bring delightful sounds from his lips.

Whatever it is that he's got, I need to go find it again. Maybe it waits out in the rain, deep inside a mud puddle that wants to be splashed. 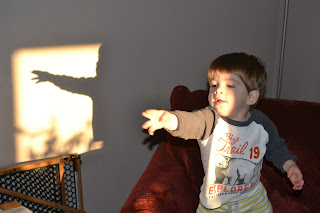 Posted by Words by Annie at 1:10 PM No comments: