"There's an all black one just down the trail. You know, they say that these caterpillars can predict if we are going to have a bad winter."

The kind woman continued on her way as Geddy and I watched a fuzzy caterpillar crawl through the dead grass on the side of the pavement. He had just assisted this one to safety, not willing to see it die by squashing as many bicycle tires zoomed past. It curled onto a stick after gentle coaxing, and then released its grip, moving without hesitation or any apparent fear, as if children with sticks were a natural mode of transportation.

We mounted our bikes again, using our "I Spy" eyes to spot several more daredevil multipeds as we pedaled through the autumn day, unexpected rescuers of these tiny meteorologists. Geddy was pleased to take on the role, though we spied many who had no chance of recovery.

I'd seen these traveling critters before and forgotten their name, so when we reached our destination for rest and a treat, I Googled them on my phone. Woollybears. Yes, that sounded familiar. Then I saw that they transform into a type of moth. "Hey, bud," I called over to Geddy, who was hopping about on some giant rocks and snacking on his chocolate chip cookie. "These bears turn into tigers."

How can something so small carry the weight of such ferocious names? It's all about the coats and colors they wear. The burnt orange band in the midst of a black body of fuzz foreshadows the orange wings to come, with black markings very tiger like. And, like bears, the caterpillars are supposed to hibernate through the cold weather, so perhaps, though they should be awake mostly at night, they are out in droves storing up calories for the long winter coming. I tried to decipher the message in their colored bands. Were they narrow stripes or broad? Wide means a mild winter and narrow means look out! Snow's coming. But we saw a variety, including the all-black one, so I guess we can't rely on these weather forecasters to give us any certainty.

That's a shame, because I'd like to know something about the near future. I don't want all the answers, but it'd be nice to plan a little. I'd like to be prepared for something, instead of how I've been going each day over these last seven months wondering when the other shoe will drop, and will it be a heavy steel-toed boot or a light flip-flop? I'd plan to duck and dodge one and let the other glance off my shoulder, no big deal. Instead, it's like being a caterpillar. We go across the path not knowing if we'll get smashed or if someone will carry us to the other side.

Here's what I really wonder: Do the woollybears know that they will get wings?

There's a beautiful story called Hope for the Flowers, by Trina Paulus, about a dissatisfied little caterpillar named Stripe, who got stuck in the hunt for "more" and forgot who he was and who he was meant to be. He ends up doing what he sees every other caterpillar doing, because they seem to have forgotten as well who they are and they climb caterpillar pillars, stepping on one another as they try to reach the top, but getting nowhere. They want meaning, they want more, but their actions day in and day out are meaningless. What makes the story beautiful is that Stripe, thanks to his friend, Yellow, finally gets it, and leaves the pillar to become a butterfly.

What would Stripe have done with his days as a caterpillar, had he realized all along that soon he would transform into another creature and fly? Would he have lived in fear, because it's kind of a big deal to go through such a change? Would he have waited impatiently, longing to reach his "better" self? Would he have actually been more content?

I don't know what will happen next. I see no sign of wings where my shoulder blades are. So much really is meaningless. Maybe that shoe will drop and hit us and hurt. Maybe I don't want to know. I can't live for the "what might" any more than I can for the "what was." I guess I'll just be here, crawling along, trying to see what's right in front of me and reaching out to hold it close. 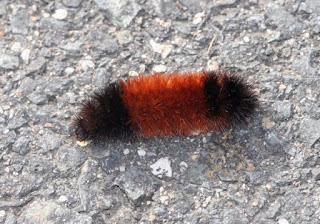 Posted by Words by Annie at 9:32 PM No comments: