Why "Star Wars: The Force Awakens" Nearly Crushed Me

Reminisce with me. Rural Idaho, the late 1980s: two young girls sit with their tape recorder playing the audio they have recorded from some corny little movies known as "Star Wars." They memorize the lines, act out the roles. Then they return to their VCR and re-watch the video tapes they made from the TV showings of their beloved movies. They love Chewbacca, Han Solo, the Ewoks. They fight over who gets to be Luke and Leia. The younger sister never wins. The older sister names her cat Princess Leia. Good times.

Let's fast forward. Three more "Star Wars" movies come into existence, much to the initial delight of the girls, now all grown up, but then they watch them, one by one, over the years ending with the last in 2005, and they grumble. They return happily to their VCRs that still work (yay!) and decide that they need Luke, Leia, and a Wookie to be in their happy place. The little sister still loses. She still has to be the woman with only one line.

Jump really far ahead now. There is a new disturbance in the force. Disney is taking on the "Star Wars" legacy. Will there be singing? Dancing tea cups? Magic carpets? The sisters are skeptical. It didn't go well the last go around. The little sister is now married to another "Star Wars" fan (though named Luke, he's really a Trekkie at heart), and he has the original, unadulterated VHS tapes of the best three movies. The older sister now has a (nearly) grown daughter and has indoctrinated her well into the love and the lore. Everyone decides to give the seventh movie a try. The older sister goes to a premiere, dressed as Princess Leia (no, not slave Leia!), and takes her daughter, who is dressed as the new character, Rey. They LOVE the movie. The little sister sends her husband to see the movie on his birthday, with a friend. She plans to go with him for his second viewing. The older sister sees it twice. It is finally time for the younger sister to see the movie.

OK, travel now with me, the younger sister, to "Star Wars: The Force Awakens." I go with my husband. He is excited to see it again and this time with me. I am excited too. I've heard great things from a reliable source: my older sister. The action begins. I'm laughing with Solo and Chewy. I'm cheering on Rey. I'm waiting with everyone to see where Luke the Jedi Master is. Then I start to cry. And I. Can't. Stop. Through the credits I fight to regain control. My husband waits patiently with me. I try. I try again. I think I'm there, but nope. I feel as if my heart is tearing from my chest. The walls are closing in. I fight to breathe. Why? Why, when the movie lived up to all I had hoped. When it was like a return to all I had loved as a child when watching the movies. What makes the difference?

I am now a mother.

No matter how often my sister got to be Leia when we played as kids, I am now Leia too. I look at her: one who raised a son to know the force, the truth, the light. That is what I try to do with my young son. Did she do everything right? Did she fail? Where did it all go wrong? I see her pain and I can't shake it.

My son, God bless him, will also have a choice. What will he choose?

I think about the unknown mother of Finn, the storm trooper. Her son was taken from her, as an infant. He was indoctrinated—brainwashed—into being a servant of darkness. That was all he had ever known. But one day. One day he takes off the mask and says no more. What does he know of the light? He doesn't, but he chooses it nonetheless.

My childhood innocence is gone. Being a mother has wrecked me, in the best way, in the hardest. It's the closest glimpse a person can have to God's agony and his delight. I don't see "Star Wars" as a fun fantasy anymore. I see it as the test we all have. The test we can't take for our children.

Posted by Words by Annie at 8:36 PM No comments:

Travel started off the new year. I took my first trip away from Geddy (and I haven't taken one since!). Only a little over 24 hours, but that meant a night and a morning that my little boy couldn't find me. He did well with his daddy, but they both missed me a lot. When I returned and Geddy was angry at me, it hurt, but we have healed. He has grown and changed so much over this year, but he tells me often at night, before he sleeps: "I need you. I want you." I say, "I need you too. I want you too."

What I remember of February was lots of illness and tissues everywhere! Fortunately March was better and we traveled to Aunt Tammy's wedding. Geddy was so exhausted from playing with all the cousins, though, that he slept through the ceremony, clinging to his Daddy-roo!

April meant more travel, this time to see family in Oregon from the bottom to the top, the West, to the East. Of course that included beach time! In May, Geddy turned two and had his first official birthday party with kids and ice cream and lots of playing time outside. The grandparents came as well to make the day extra special.

Mommy's birthday and Father's Day were the same day in 2015, so it was a super special time. Fun at a nature center and lots of good food made it a perfect day with family. July and August offered camping adventures in Idaho and Oregon. Geddy had so much fun that we are eager to camp again this coming summer. But we need better sleeping arrangements . . . . 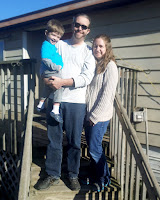 In September we got to see the beautiful "boon boons" over two days. I'm hoping to take Geddy up in one next time, since they have a free day for kids! October was pumpkins and friends and two dates for Mommy and Daddy! I think we are getting a little better at prioritizing those! The holiday season rolled in and we rolled away in the car again to spend Thanksgiving with family, seeing many friends along the way. We cherish those days and memories as they were shadowed by sadness soon after with the loss of Grandpa Jerry. But we know we will see him again one day.

Christmas came quietly. Wait, not with Geddy it didn't. Luke and I were rather sick, but we had a nice day at home, just the three of us. Thankfully the sickness didn't last long.

Welcome 2016. We are ready for more adventures!

Posted by Words by Annie at 4:45 PM No comments: