Sometimes, in spite of living in a sprawling old neighborhood with a big park in our backyard, we feel the itching need to escape our little big city and go touch the land. We especially want our son to experience the wide open wild that we knew as children. And we want him to laugh and play and get into mischief with cousins. Fortunately, this time of year dirt and cousins are not too hard to find.

This weekend in the wilds of Eastern Oregon, we watched in amusement as the kids tromped through the corn maze, chased each other around straw bales, and got to pile on for rides on the four-wheeler with their Nana/Great Aunt. But even with so many activities to choose from, the kids also loved just playing in the dirt.

They crawled in the dirt.

They rolled in the dirt.

They made piles of dirt.

They kicked and scuffed their shoes to make trails in the dirt.

They picked up handfuls of dirt and let it sift through their fingers and blow in the wind.

They threw dirt on each other and on their own heads.

They buried their legs in the dirt.

I even saw one tiny cousin cheerfully eating the dirt!

We parents, meanwhile, tried not to think of the mess that would be in the car, the dirt ring that would circle the tub, and the snotty dirt that would be coming out of noses for days. We remembered when dirt was our friend too.

The dirt-clod wars we had.

The dried mud pies we sampled.

The dirt and brush forts we built.

The dirt roads we made with our toy cars.

Every dirt memory surfaced with each cloud of dust the kids displaced. Dirt used to constantly live under our fingernails.

Our country-escape-turned-dirt-reunion ended long after bedtime. As we said Good bye to all the cousins and family and drove off into the dark and the sage brush, our son said: "We're going to get lost! There are no lights!" My husband explained: "This is what's called the country. This is where I lived when I was little like you. I know my way around."

And then I think I heard the dirt whisper, "Take care, old friend, and come again soon." 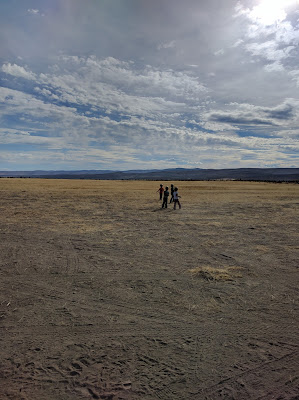