Lately I've been reading more mom blogs and personal online essays about raising boys. They're fun to read to hear others' perspective on male children and the joys and challenges of raising them, and I hope to get a little insight. One part I still don't really understand is why I should expect a big difference in behavior in boys and girls while they are children. I mean, my sister and I did our fair share of wrestling (maybe I was the lesser willing of the two), tree climbing, dirt clod fighting, and truck playing. We captured frogs and played with LEGO and pretend swords. And when my niece was Geddy's age, she loved to climb up on the couch and dive off of it. What I'm getting at is that I'm used to girls getting dirty, being a bit reckless, and being physical. I always thought of these as part of being a kid.

Well, whether it's a boy trait, a kid essential, or simply a Geddy do, I'm trying to relish every self- head slap, "bonk," and "meep" from my son. He comes with batteries included and they never run out of juice. Climbing up the slide the wrong way just feels right to him. Dumping dirt and water all over the floor? All part of a good day. He wants to splash the water out of the bath, make his food fly, wear his bowl on his face, collect every rock he walks by, and yell at the top of his lungs. And if Mommy and Daddy say that's enough of that, he wants to do it again twenty times.

What can I do but smile and say "That's my boy" when he throws his little plastic balls into the hot hot toaster oven? How can I help but be proud when he spits all over and then paints his crib with saliva? When I try to avoid using the word No and come back with a "please-don't-do-that" instead, should I expect anything less than a hearty "[a]gin!"? He's all boy, all fun, and all our child. As he grows I'm sure the boyness will appear more clear, and even this part-time tomboy will see that Daddy has the inside scoop. But I hope my son will teach me what I need to know about raising a boy, and I hope I will always listen. 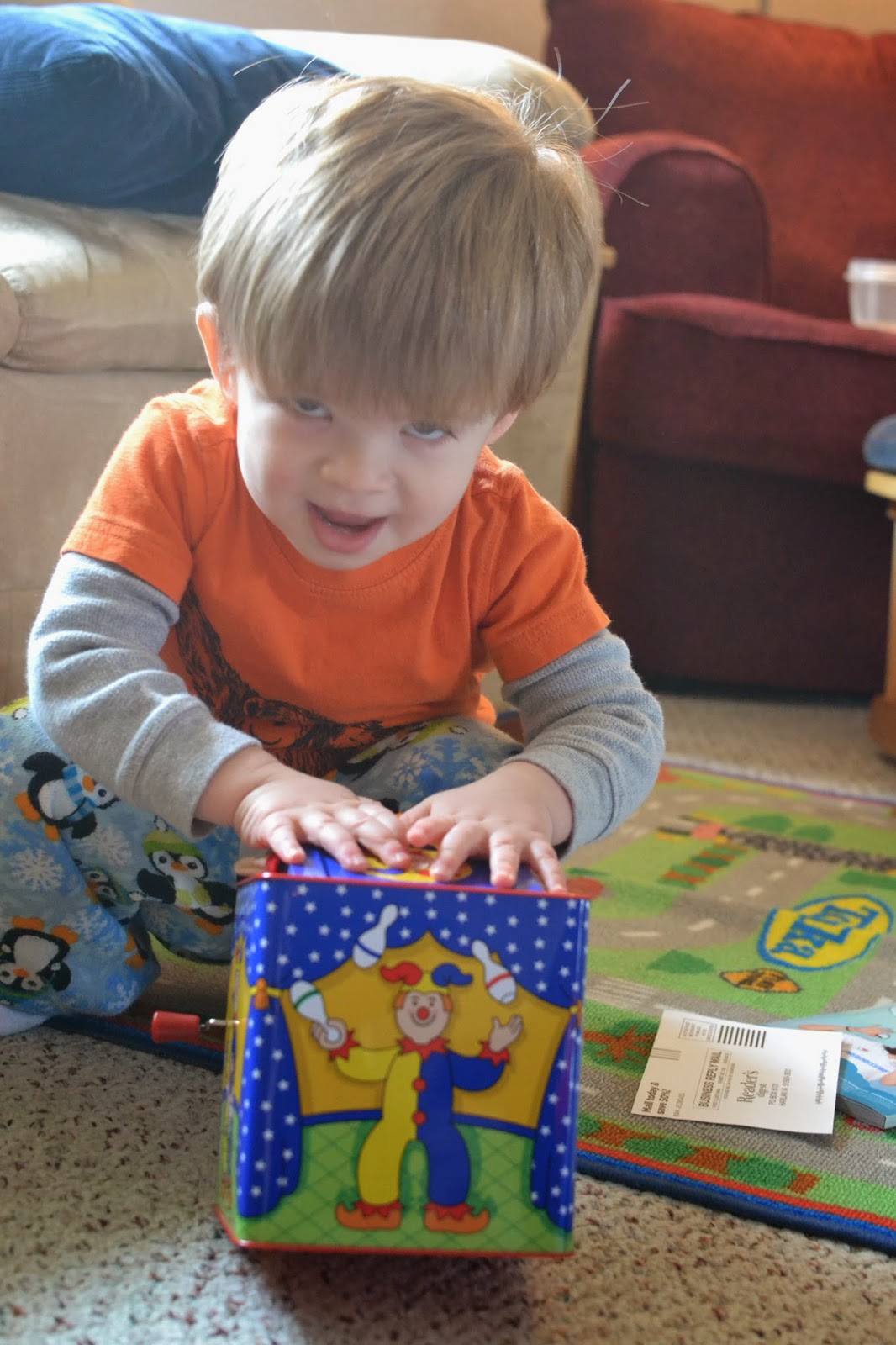 When Mommy Isn't There

A couple of weeks ago this mommy went through another first. I know, usually it's all about Geddy's firsts here but this one definitely involves a first for him too. And for Daddy. This mommy got on an airplane and flew away from her baby. I wasn't just gone an hour or two to the store or to visit a friend. I was gone a day, a night, and a morning. For me, that's a big deal. My son, every now and then while I was away, also thought it was a big deal. Luke, he was ready. Ready to take charge of all the necessary details. Or so he thought. Little did I know that I would have such a great time and be so busy that I wouldn't burst into tears at the thought of my son. Little did Geddy know that Mommy wasn't going to be around for milk time. Little did Daddy know that Geddy was going to take full advantage of having Daddy all to himself and pull out all the stops. But the biggest surprise in this first was the way Geddy reacted when I came home.

My friend's wedding was far enough away that driving didn't make sense and flying the whole family seemed costly and extreme. When I purchased my ticket I considered flying home the same day, but I knew that getting to the airport on time after the wedding would cause too much stress and likely be too challenging. Excited to go but nervous too, I slept little the night before. A lot of that had to do with normal travel concerns, so once I was at the airport not forgetting anything and on time, I felt pretty good. Then I told Geddy Goodbye and that I would see him the next day. He started crying. Then Luke pulled away from the curb. Well, I told myself, they would get back home and Geddy would ask for a cracker and then he'd be fine. Luke would make breakfast and then they would dance and listen to music and play and Geddy would be happy. Yes, that all came true.

I made several phone calls home throughout the day, and each time I called I could hear a boisterous Geddy in the background. Luke said they were doing well and not to worry. It wasn't until the end of the day, when I was relaxing after the wedding and getting ready to sleep that I got the full picture of how my boys had been doing. Geddy was finally asleep, which hadn't taken too long since Luke has put him to bed without me many times. There were calls and cries for Mommy, but Geddy soon settled down. Then Luke told me how he had spent the day going around the house cleaning up after our son.

Geddy, as usual, had been demanding Daddy's attention almost constantly. He can play independently, but he prefers attention. He likes to grab Daddy's pant leg and pull him into the living room then pat the floor and say "chair" so Daddy will sit down and play. Sometime during the day Geddy felt he wasn't getting enough attention so he started messing with the plants and getting dirt all over. Luke dealt with it and thought that was that. Later, however, Luke realized he got a little too absorbed with his computer. Geddy had been coming and going from kitchen to living room, not being particularly noisy but he was where Luke could see him out of the corner of his eye so he didn't have cause for concern. After a bit Luke looked up and noticed something all over the floor in front of him. Oreo cookie crumbs! And then, OH! He got up and watched Geddy, with a spoon, scoop dirt from a plant in the dining room and run out and dump it on the floor then run back! Luke followed, saying No, but watched again as Geddy looked him straight in the eye and scooped and dumped again! I think it might have been after this that father and son spent some quiet time in Geddy's room, where Geddy threw a little fit but finally calmed down.

I laughed over the story and then told my husband I hoped he could get some sleep. I thought I would sleep really well not hearing Geddy noises and jumping up to check on him. HA. Sometime around normal Geddy wake-up time (even though I was in a different time zone) I awoke suddenly, sure I had heard my son. Before I boarded the plane that morning I called Luke and discovered that he had had to get up before five to try to soothe a crying boy who only wanted Mommy. Then, heartbreaking to hear about, Geddy and Daddy had searched every room looking for me as Daddy kept telling Geddy that Mommy wasn't there but she would be home in a few hours. I wasn't laughing then. I was so ready to be home and Luke was eager for it too!

But when I rushed up to the car at the airport to greet my baby, he just stared at me. OK, I thought, he just woke up from a nap and is still a little sleepy. He will be excited when he gets out of the car. We stopped for lunch and all Geddy was interested in was food. He kinda glanced at me a little but was mostly indifferent. What's this? I wondered. When we got home I really got to see just how upset my son was at me. He basically didn't want me around while he and Daddy danced and played and did all the things they had done together without me. This was not the moment I expected to be sad. By bedtime, Geddy was mostly back to his normal self, but I still felt a distance between us. It made me not so interested in any future solo trips while he is so young.

Many days have passed since I was away, and Geddy has shown me much love and affection during this time. I'm grateful he has forgiven me. Yes, I know he isn't permanently damaged or anything. And I know he did want me back, he just didn't know what to do with all that he was feeling. I'm grateful, too, that he has a special bond with his daddy, and it's OK that they have their little dances and songs. Maybe I have to shut my eyes sometimes or go into another room at Geddy's request, but I can handle that. Before long I know he will have a lot going on in his life that only Daddy can relate to or help him with. I don't want to be a nosy mom or demanding of his constant attention. I just want to love him for him. But I sure don't ever want to break his little heart again! 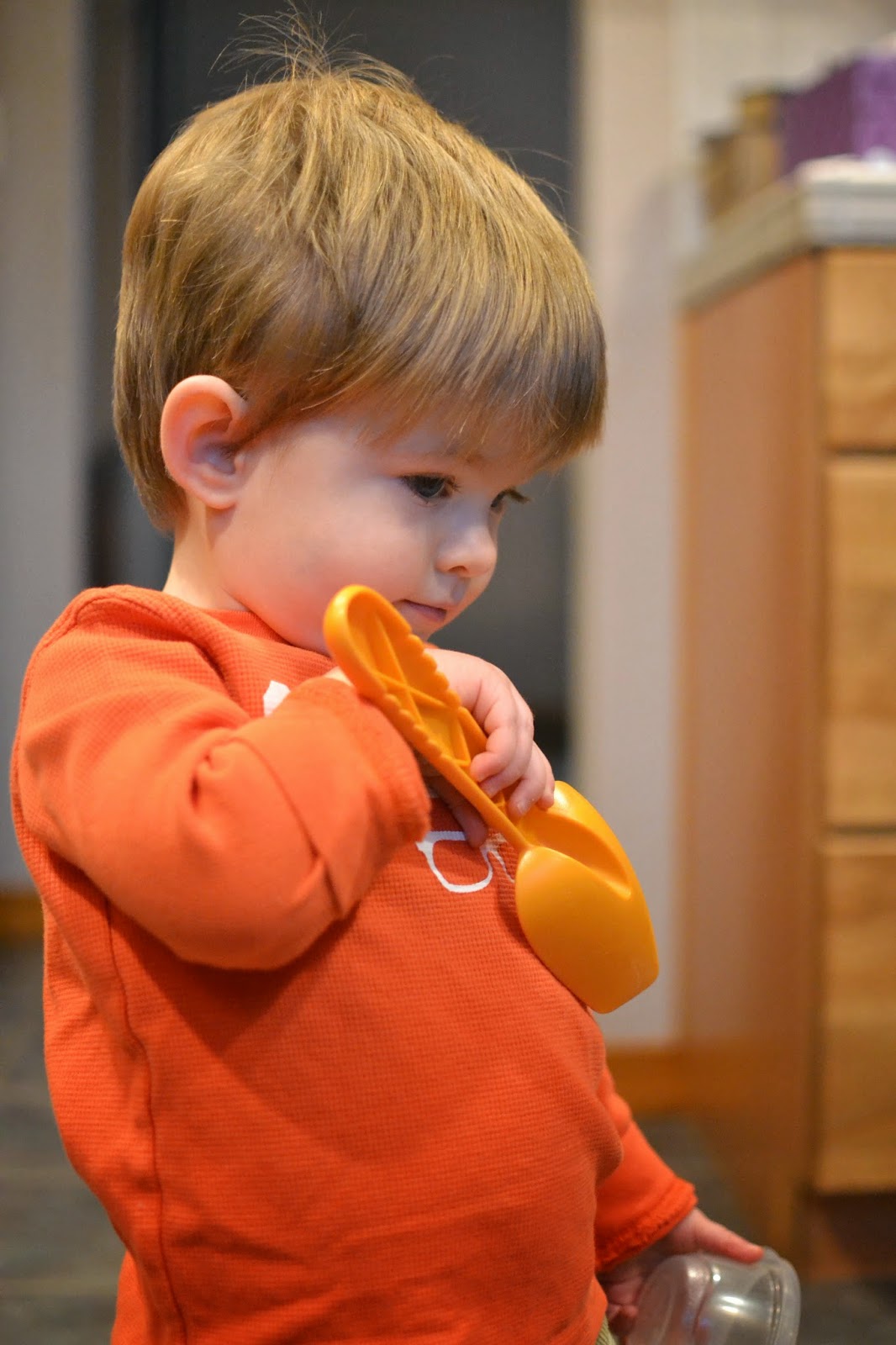