Three Vignettes of a Mom at Home

The doorbell rang. Out on the front step was a giant box, one I had waited so long to get—two whole days with Amazon Prime. I couldn't wait to open it, but wait I did until Monday morning when Luke was at work and I could be alone with my prize. Geddy was there, of course, to share in the excitement and cheer me on as I removed the packaging and assembled all the parts to—wait for it—my new vacuum cleaner!

OK, I am officially boring. Don't jump to conclusions, though. I still want something less appliancey for my birthday. I still like roses. But this vacuum is a relief to my back, an answer to clean floors, and a reason to dump everything out of the closet and clean from top to bottom. Spring cleaning, here I come! 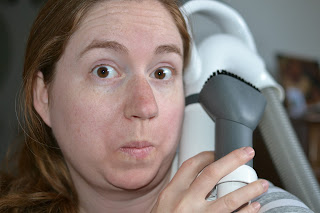 "I love you," I told my husband, and hung up the phone. Another late night at the office meant dinner for two not three. The salad dressing waited as I answered the beep of the oven timer; the bread was done. After filling Geddy's plate, I turned back to my salad. Ah yes, the dressing. I gave the bottle a vigorous shake to mix up the oils and spices. Except, huh: I forgot I had taken off the lid.

Jokes abound online about moms needing time alone but only getting it when they can escape to the bathroom. Of course along with those jokes comes the punchline that with small children at home, time in the bathroom is rarely a solo routine. My son makes sure that I am not the exception to this scenario.

The other day we were all downstairs when I said I needed to go use the bathroom. I didn't make any special provisions for Geddy because Luke was there. In other words, I didn't check to make sure the stove was off or force Geddy to be on my side of the locked gate at the top of the stairs (so he wouldn't escape to go to the park while I was occupied). But I should have shut that gate for my protection.

I settled in for a nice rest when outside of my door there arose such a clatter. Moments later there was Geddy, dragging in one of his chairs from his room. What are you doing? I foolishly asked. "I just watch you," he said, smiling as he plopped down on his chair and started swinging his legs.

There we were, both seated, for the duration.

Our Son is Rock and Roll

"How did you pick the name Geddy?"

We get this question a lot. The most recent asker was about to cut Geddy's hair. She was fortunate to have some atypical salon chitchat.

I told the tale quickly, focusing on the most straight-forward answer: we stole the name from the lead singer and bassist of Canada's preeminent rock band, Rush.

When the name first struck us as a good idea, my husband had some reservations. Did he really want to name his son after a rock star? But the name was too good to pass up. We bestowed it on our son with no strings attached.

But even though we have no dreams of pushing our son into stardom, he is growing up with a musical library at his eardrums. Since his daddy has quite a talent for guitar and loves an eclectic supply of tunes, Geddy has heard a lot of music—live and canned—in our house. While only a few weeks old he kicked his legs vigorously to Lady Gaga. And every month of his life he's jammed to his daddy's guitar interpretations of Matchbox 20, Gaelic Storm, Garth Brooks, or, of course, Rush.

When Geddy was a baby and I would leave him home with his daddy while I shopped, I would return to a house blaring with music and a happily sound-asleep boy. He spent many months where he couldn't sleep without at least a little music at night. We opted for the quieter Norah Jones when we wanted to sleep too.

Now that our son is older and able to ask for what he wants, we often hear his voice in the backseat of the car asking that we make the music "louder." His favorites now range from the Christian "Lighthouse," from Rend Collective, to the pop rock "Shut Up and Dance With Me," from Walk the Moon. He loves to sing along and belt them out as loud as he can.

I was surprised the other day when I heard my little boy running around the house singing out, "Beat it! Just beat it!" over and over and over. One little viewing of a Michael Jackson video with his daddy and he was hooked on the, well, beat!

The funniest rock moment, however, happens frequently. Our son dearly loves the Pixar movie, "Planes: Fire and Rescue." Whenever he asks to watch it he usually says something like, "Want to watch Fire Rescue, the SOFTER one!" What he wants, as he breaks into a singing chat of "Softer! Softer!" is to get to the part of the movie where AC/DC belts out "Thunder! Thunder!" Why he thinks it's "softer!" is anyone's guess, but he loves to rock his head up and down and run around in crazy excitement.

Our own little rock star after all. 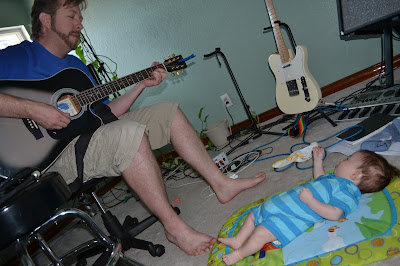